Closing the strong and stable door after the horse has bolted

Well we’ve been here before I think.

Not exactly here, but there’s a pattern.

Pretty much everyone was wrong about what would happen before this election – as they were before the 2015 election, the Brexit referendum, Trump.

Then afterwards, (often the same) people start offering explanations for why things turned out the way they did.

And we hold onto those explanations until the next time we’re all wrong.

I don’t want to be too critical. I rely on much of this analysis to try and get my bearings. And analyse wrongly all the time too.

But I can’t help thinking that if things had turned out completely differently then we would now be hearing equally plausible explanations of why that different result came to pass.

It feels like the world described by Duncan Watts in Everything is Obvious, where a lot of supposed explanations are really not much more than people saying: some things happened and some other things that could have happened, didn’t.

The last few times, we’ve been victims of a pernicious right wing grasp over social media with the left in a feeble little bubble. Now it turns out that social media is the way the left outplays the Daily Mail.

Lynton Crosby was a svengali genius. We all knew that. Now his reputation is as dead as the cat.

Young people don’t vote. Consensus was that they wouldn’t this time. Then they did.

So afterwards it becomes about why things have changed and what it means for next time.

A new cycle of explanation and prediction, and recalibration when the new predictions turn out wrong.

And one problem with explanation is that when we’re trying to make sense of social change it’s really not possible to know if something represents a trend, a high water mark, a blip, or something else.

As Duncan Watts says, the events we think of as outcomes are never really endpoints. We can only make sense of them by what happens next. So then we’re back to speculation.

I think too that faulty predictions can reflect a lack of rootedness. People pontificating about situations they are not immersed in and don’t fully understand.

We’re also in Philip Tetlock territory. His research has shown that experts’ predictions, on average, are no better than guesswork. I talk about this in relation to campaign planning here.

But he’s talking about averages. It doesn’t mean all forecasts are useless. There are behaviours and approaches that can help improve prediction and forecasting,

And there are lessons in all this for how we conceive and plan advocacy.

Specifically, there are ways to improve the quality of prediction and planning and to ensure we respect the inevitable limits to prediction: 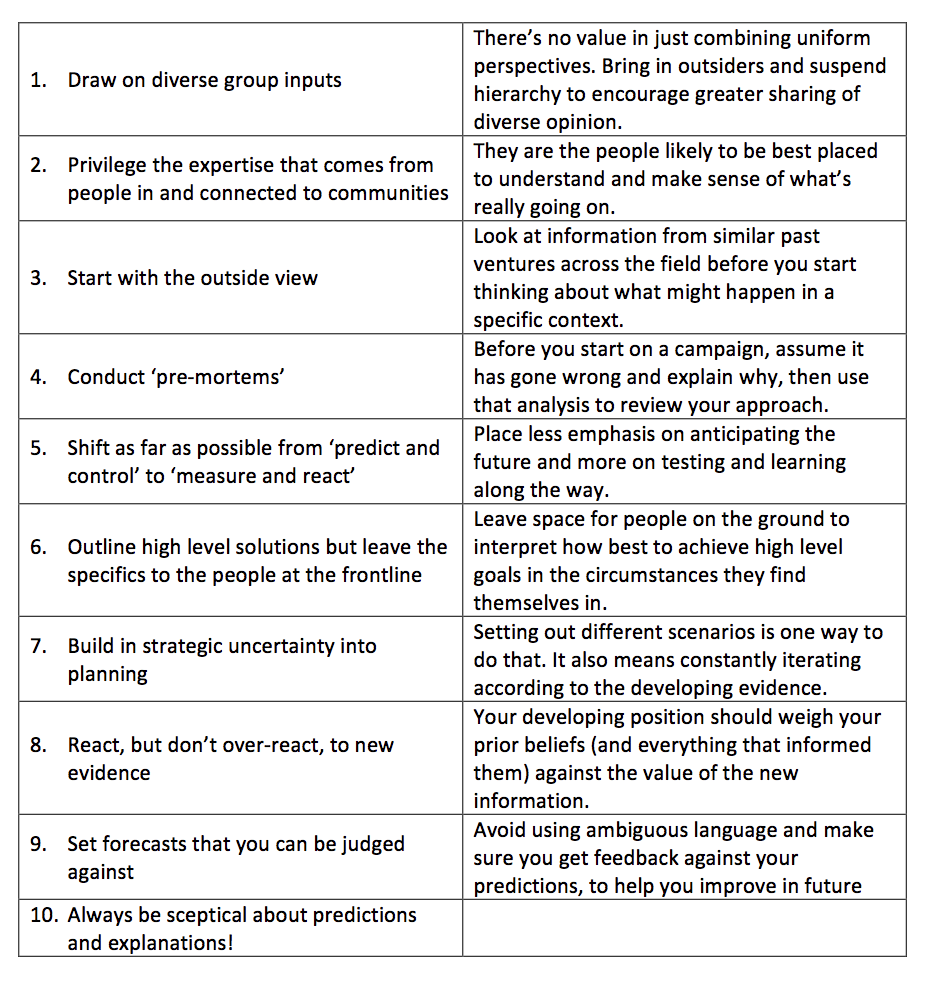 (These suggestions channel Duncan Watts and Philip Tetlock with a bit of Daniel Kahneman & Margaret Wheatley thrown in.)