Why change a winning formula?

The Advocacy Iceberg
Why change a winning formula?

Well, you could ask Tesco that question. Or Vince Vaughn.

In both cases, it appears that the seeds of their downfall were sown in the supposed glory days, even though it may not have been obvious at the time.

(Though with Vince Vaughn, anyone who sat through Couples Retreat might say that it was in fact pretty likely.)

Which goes to show that there’s no such thing as a best strategy, it’s always context-related.

Which is where fitness landscapes come in. 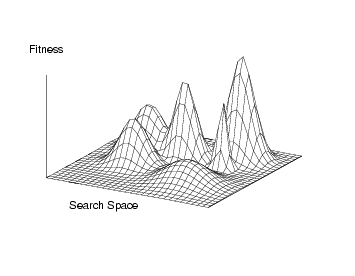 They set out a landscape of all possible strategies (with proximity showing similarity) in a three dimension model, so that the better the strategy (i.e. its greater fitness for purpose), the higher the peak.

So you end up with a topography of mountain ranges and valleys.

But being good at what you do can make you more vulnerable. Leaders can get left behind. Disruptive technologies aren’t attractive at first to an organisation that is already doing well. The current strategy is working just fine. But then over time new ways of operating can displace previous ways of working, and so in the end you get caught out.

It’s an ever-shifting terrain. And if the peak you are on starts to decline, then you can get stranded.

Biologically, evolution deals with need to be constantly responsive to environmental change through genetic mutations that introduce variation – through a combination of a large number of small adaptations and occasional more substantial adaptations.

And that’s a good model for NGOs too. It suggests a twin approach:

It’s important to get the balance right. That means a larger number of minor innovations, a smaller number of more substantive jumps, with the occasional riskier punt.

And ideally you would try out a range of different approaches, rather than banking on one alternative.

But also it’s important to accept that some of adaptations will work out, some won’t. So organisations need to be tolerant of risk.

This buil-in failure rate works in evolutionary terms because change is cumulative: what works is banked and passed on to the next generation.

In the same way, it’s important that organisations have good institutional memory and understanding, to be able to build on what’s gone before (and not keep trying the same things). So evaluation is important.

It also highlights the importance of reflection and learning – not just to help you be better at what you are currently doing, but also as a way to open up bigger questions about how you are going about things, and what you could try differently.